This book is an extraordinary memoir of two people and the place they made. 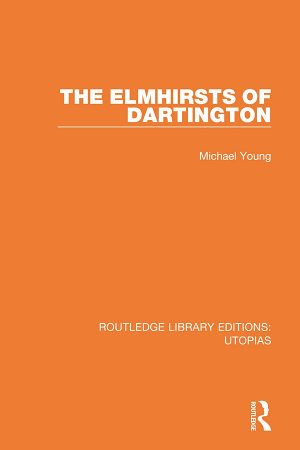 Dorothy and Leonard Elmhirst were the founders of Dartington - she the daughter of an American millionaire who was once Secretary to the US Navy; he the son of a Yorkshire parson and secretary to Rabindranath Tagore in Bengal before he married Dorothy. They were the twentieth century’s most substantial private patrons of architecture in England as well as of the arts and education. Dartington School was one of the most famous experimental schools in the world. Bertrand Russell sent his children there, as did Aldous Huxley and the Freuds. Dartington College of Arts and its associated Summer School of Music were equally famous in the world of the arts. Bernard Leach taught pottery, Mark Tobey painting, and Imogen Holst music. The Amadeus Quartet was formed there. Benjamin Britten and Peter Pears were frequent performers. In a setting of great beauty, school and college belonged to a general experiment in rural reconstruction. Dartington Glass was made in the Devonshire countryside and exported world-wide. So were Dartington Textiles, Dartington Furniture and Dartington Pottery. This book, originally published in 1982 (and reissued in 1996), describes how a unique combination of education, arts, industry and agriculture came to be put together. The result was one of the hardiest Utopian communities of modern times. It eventually overcame the strong local opposition to such a daring undertaking. The author finds the origins of modern Dartington in the founders’ hopes that mankind would be liberated through education; that a new flowering of the arts would transform a society impoverished by industrialisation and secularisation; and that a society seeking to draw together town and country would combine the best of both worlds. This book is an extraordinary memoir of two people and the place they made.